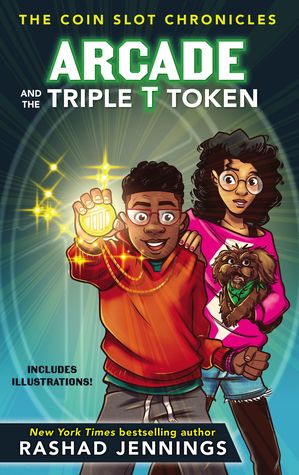 Arcade and the Triple T Token by Rashad Jennings is the first book in a junveile fiction series probably best for 4-6th graders.

Eleven-year-old Arcade Livingston has some typical kid problems–he’s moved to a new city and is the new kid at school, some bullies have him in their sights and having to take the subway everywhere makes it difficult to check out all the library books he wants. But he also has one very unusual problem… a mysterious token that seems to be transporting him on some pretty crazy adventures.

Together with his older sister, Zoe, Arcade will learn to navigate his new home, while trying to uncover the secrets of this magical token that appeared out of no where.

This was a really fun read and quick too! I found the characters super relatable, each in their own way, and Arcade is someone you can definitely see being a friend. There’s almost this idea of stepping into another person’s shoes that the author is playing with, through the lens of  “what do I want to be when I grow up,” a question that a lot of middle grade kids are just starting to explore. I sort of loved that each of Arcade’s adventures were tied in to one of his friends interests and desires.

Arcade is sort of this “go to guy,” the guy who knows all the answers, even if he has no idea what he wants to be himself. He’s smart in an observant way and I liked how he sees the world around him.

There’s also a secondary lesson going on in the background with this one–this idea of why should we only think inside the box, when there are other ways of looking at the world. It’s a more obscure theme, but it’s there.

The fifth book is about to come out in this series, so I think this would be a great one for both boys and girls in 4-6th grade. There’s a lot to discuss and a lot that can be explored about ones own aspirations. This book gets a high 4.5 stars from me.