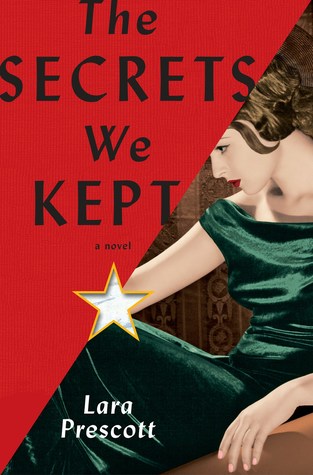 The Secrets We Kept by Lara Prescott is an adult historical fiction novel set during the Cold War.

In the midst of the Cold War, the CIA believe that the only way to fight the Russian regime is by changing ideology through literature. In the hopes of smuggling Doctor Zhivago, a radical book according to Russian standards, past the Iron Curtain, the agency recruits two secretaries, out of the typing pool to help achieve this end.

Sally Forrester, is glamorous, charming and seasoned spy who proved herself during WWII. Irina is a new recruit, pulled off the street for her ability to go unnoticed in a crowd. Sally trains Irina in the ways of female spies and the two create a close bond.

Alternating between Sally, Irina, the typist, and Olga Ivinskaya’s–the inspiration for Doctor Zhivago’s Lara–narrative, we follow a story of intrigue, rebellion, subterfuge and more.

This is the story of four very different types of women and their roles during the Cold War. Sally is a veteran and the sparkle of the agency has begun to fade; Irina is new an excited to be more than just a muted typist; Olga is a mistress to Stalin’s favorite author, and the typists are silent observers. Each of these women have a different perspective, a different roll in the novel and it was interesting to see how they intersect.

This was an OK book for me. I wasn’t dying to finish it but it was interesting to learn all these tactics about the CIA before it moved to Langley. I loved that many of the quotes were pulled right from redacted reports. And being a librarian, fighting a war with books is totally up my ally.

I did find the conclusion of the novel to be set at a much quicker pace than the rest of the novel, which bothers me more with historical fiction than other genres. It just wrapped up too quickly for the amount of build up there was.

Not a bad read but not one I found myself thinking about much after-the-fact. This one gets 3 stars from me.