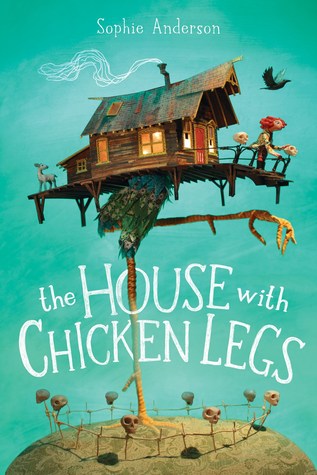 The House with Chicken Legs by Sophie Anderson is a juvenile fiction book for 4-6th grade.

Twelve-year-old Marinka lives in a house with chicken legs and is destined to become a Yaga–someone who guides the dead into the afterlife. She has been in training since birth, guiding the dead alongside her grandmother every night. But the dead make terrible friends.

All Marinka wants is a normal life, with a friend who isn’t dead and who won’t disappear an hour after they meet. So when Marinka has a chance to make a real friend, she jumps at it without thinking about the consequences.

Will Marinka ever find a way to live the life she’s always dreamed of? Or will her actions but the whole world at risk?

I totally have a thing for the Yaga myth–really Russian folklore in general. I’ve read several teen and adult books about takes on Baba Yaga but never a children’s book, which is why I was so excited to pick this one up and it didn’t disappoint.

This book has a lot of heart. You can use it to discuss grief and death, the circle of life, but also responsibilities, being selfish vs. being yourself and even the idea of fate. It isn’t a difficult read, even with the theme of death floating around. There is some light humor and a satisfying conclusion.

I loved the personality of the house itself. For a house, she is very expressive. Marinka on the other hand, was a smidgen annoying in that she doesn’t think things through. But that also, isn’t entirely her fault since the truth had been hidden from her for so long. She did grow by the end, but she also got a pretty good deal if I do say so myself.

This would make a good read for 4-6th graders who like a little bit of magic. This one gets 4 stars from me.