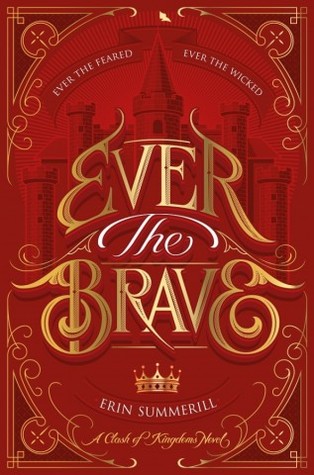 Ever the Brave by Erin Summerill is the second book in A Clash of Kingdoms.

After saving King Aodren, Britta finds that her channeler powers have connected them, forging a bond between the two that keeps pulling them together. All Britta wants to do is live out her life in her father’s cottage with the man she’s loved since she was a girl. But now that life is threatened and Britta is now the one being hunted.

Evildoers want Britta, so they can control her powers and make her do unspeakable things. Britta must learn to harness her power and control them before she loses herself and the ones she loves.

Can Britta save herself and help the rest of her fellow channlers? And what repercussions will this bond to the king mean for her?

I will admit, I was not the biggest fan of the first book in this series. Ever The Hunted didn’t wow me and neither did this one. In my opinion this series suffers from the old show/tell problem. I felt like I was being told how to feel rather than being able to feel it for myself. The emotions of our characters were either really high or really low, there was never this middle ground where many of our most interesting feelings lie.

I said in my review of the first book that it felt like the romance was forced and made it feel like the story took second place. I feel exactly the same way with our love triangle in Ever the Brave. The plight of the kingdom and the Channeler’s didn’t really matter as much as who Britta would choose to love. And what information we got about this world wasn’t nearly fleshed out enough.

That being said, I love the titles of these books. They are just fun to say. And I think many will find this an entertain read. It just had too much in some respects and too little in others. Will I read the next one, yes. Am I looking forward to it, not really.

This one gets 2 stars from me.