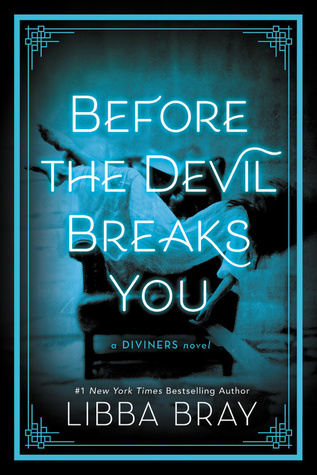 Before The Devil Breaks You by Libba Bray is the third book in The Diviners series.

It’s 1927 in New York City and the jazz age is in full swing. After facing sharp-tooth ghouls and a terrible sleeping sickness, the diviners are ready for the truth. Evie, Memphis, Ling, Sam, Isaiah, Theta and Henry and their non-diviner friends Jericho and Mable are more determined then ever to discover the truth behind their powers and the evil forces threatening their city.

As the diviners uncover clues and come into their powers, they find out that terrible forces are at work. A mysterious entity–The King of Crows–has power over the dead and is working to cause a breach between the world of the dead and the living. Together the diviners must work to reveal secrets that could endanger them all.

Will the diviners be able to uncover the truth before it is too late?

This wasn’t my favorite of the diviner series so far. I don’t know why, but I have a problem with series that get longer and longer with each book. Yes, I understand that the plots get more complicated as the story progresses but sometimes the also get more convoluted. We aren’t quite there yet with this series but I sort of feel like we might be heading in that direction. There were some plot lines that almost feel thrown in and some scenes that I just didn’t feel we needed.

I will say, I love the era the author has chosen to write in. The Jazz Age mixed with the supernatural is just wonderfully done. I love all the lingo and our characters have some really wonderful expressions and characteristics that wouldn’t work well in another time period. This book makes me want to go around using the lingo and of course get crazy looks from everyone!

On top of crafting an atmosphere that perfectly represents the 1920’s, Bray also doesn’t shy away from the political climate of the age. She addresses themes like racism, prohibition, eugenics, gender equality and more. Our cast of characters each face these themes in their own way.

Overall, this was an entertaining read and I will be interested to see how Bray wraps everything up. This one gets 3.5 stars from me.

2 thoughts on “Before The Devil Breaks You”