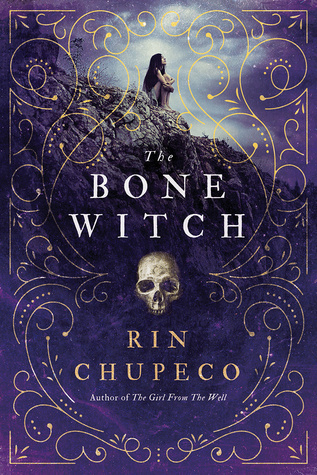 The Bone Witch by Rin Chupeco is a YA fantasy novel about a young witch who comes into her powers and changes everything. Tea was just an ordinary girl until she raised her brother from the dead. Now she is a Bone Witch, a rare bread of Asha that is often more feared than respected.

Tea travels far from home, in the company of her dead brother, in order to train under the last living Bone Witch. But her training is slow and involves more politics then she would like. Navigating this strange world of Asha’s and learning to control her magic, will take all of Tea’s strength if she hopes to be ready before war breaks out.

Will Tea learn to control her powers before it is too late? And what happens when a girl with powers unlike any other rebels against tradition?

The narration for this book reminded me a lot of Patrick Rothfuss’s The Name of the Wind. Tea is retelling her story to a scribe of sorts, so we go back and forth between the past and present. In the present something is brewing even as we witness Tea’s journey to become an Asha. This type of narration just isn’t my favorite; I find it hard to get into the story. Eventually, I did get used to it but it took a while.

This world Chupeco has built is very reminiscent of the Geisha, except Geisha with supernatural powers who are protectors and kick a lot of ass. This was an interesting concept but I felt like maybe it was taken too far. There was so much focus on the Asha’s clothing and their hair and not enough of their supernatural training. Tea’s Asha training was dragged out a little too long and the really interesting parts of the book didn’t happen until the last quarter.

What I did really like was Tea’s connection to the dark and basically any time she got to confront the beasts or the faceless. Her powers were intriguing and I wished they were displayed more often. I really liked the ending of this book. Things really picked up and set the stage for a sequel. There was also a reveal I saw coming but enjoyed immensely never-the-less.

Overall, this wasn’t a bad read but it took a long time for me to get into it. As an audio book the first chapter was a little too convoluted to pull the reader in and it took a good 45 min to an hour for me to figure out what was going on. But the ending really saved it for me, which is why this one get’s 3 stars.

2 thoughts on “The Bone Witch”