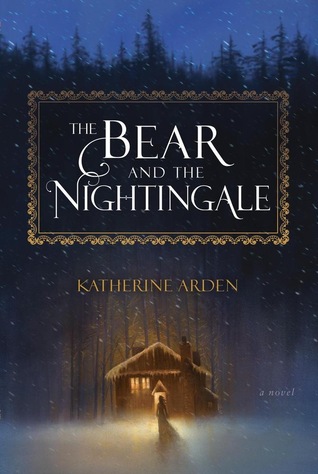 This is one I’ve been waiting for. The cover is beautiful and I tend to like stories that are set in Russia. The synopsis also had a very folktale, mythical feel and you know I can’t resist that.

The Bear and the Nightingale by Katherine Arden takes place in medieval Russia, during a time when Christianity is rising and the “old gods” are losing their power. On the outskirts of Moscow, winters are long and life can be hard. Families huddle around the fire and listen to the old tales. In this world of cold and labor everyone has their place, except for Vasilisa.

Vasya is her mother’s child, she is wild and unruly and she has the sight. She can see the spirits of the land and home; spirits of the lake, hearth and stables to name a few. The villagers call her a witch and this only worsens when Vasya’s father brings home a new wife, soon followed by a devout priest. As the pair instills the fear of God into the village, Vasya witnesses the spirits weaken, leaving the house unprotected from evil.

Now Vasya will fight to protect her home and must rely on an unlikely stranger with eyes of Frost. Can Vasya appease the spirits and protect her home? Will she be strong enough? And if safety comes at a cost, will she be able to pay it?

This was such a lovely read. It felt fresh and yet steeped in tradition. I imagine this would be one history or linguist majors would like to dissect. It made me want to know more about Russian folktales and, surprisingly enough, politics of the time.

I just loved this idea that there are spirits all around us, helping to mend clothes, care for the horses, guard the lake. And the images Arden provides us of them just felt so authentic. The fact that these spirits are tied to belief and little offerings and that the rise of Christianity threatens them, seems like a great battleground for discussion.

All of the characters were so vivid. I could just picture the Frost King, Vasya and Alyosa (sp?) pitted in this epic mystical battle. I also loved this timeless world Frost takes Vasya to. A world of snowdrifts and bed frames. A world that both is and isn’t. Wonderful.

I couldn’t quite give this one 5 stars because there was a small chunk in the middle where the pace dragged, but now that I know that Arden has sequels planned, I understand it’s purpose. Necessary backstory to build upon. Although, I will say, this book ended perfectly. I was so, so satisfied with the ending that I’ll almost be hesitant to read a sequel.

This was a great read and I would recommend it to teens and adults. I think there will be wide appeal for this one.

4 thoughts on “The Bear and the Nightingale”